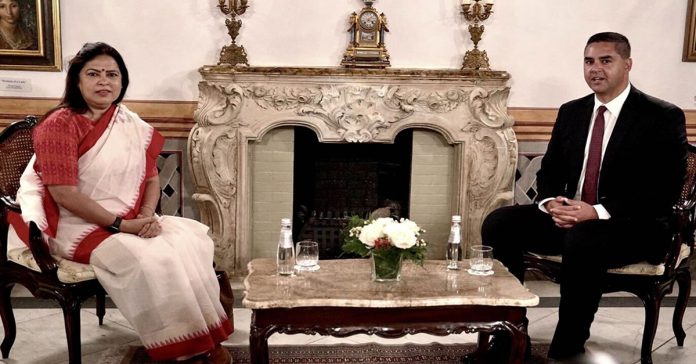 “In Malta we currently have 112 companies or private investments from India, but it is necessary that in the commercial sector we continue to develop the relationship we have with India and, above all, to increase our exports to India”, Maltese Foreign Minister Ian Borg said after bilateral talks in Malta with visiting Indian Minister of State for Foreign Affairs and Culture, Meenakshi Lekhi.

Malta and India, over 50 years of relationships.

After more than 57 years of bilateral relations, the Minister added, relations between the two countries can still be strengthened. Despite the difference in size between Malta and India, both countries have vibrant economies that should be exploited in the best possible way for the benefit of the Maltese and Indian people.

Pleased to meet @OwenBonnici, Minister for the National Heritage, Arts and Local Government of #Malta. We discussed possible ways to enhance cultural exchanges between #India and #Malta to add to growing India-Malta relations. @IndiainMalta pic.twitter.com/v5CRNAg4v8

Regarding the commerce sector, Borg said that the information and communication technology, pharmaceuticals and even the film industry sectors offer many opportunities for collaboration with India.

A Maltese ministerial delegation will visit India next month.

Minister Lekhi also stressed the need to continue strengthening trade ties between Malta and India and that the Indian government will continue to sign and collaborate on a series of agreements with Malta.

Finally, he hoped that Maltese companies could take advantage of the many incentives offered by the Indian government to expand their operations in India.

The 2021 edition of Sigma Magazine is now available