HomeEvents"Malta is ready to restart from the digital economy"
Events

“Malta is ready to restart from the digital economy” 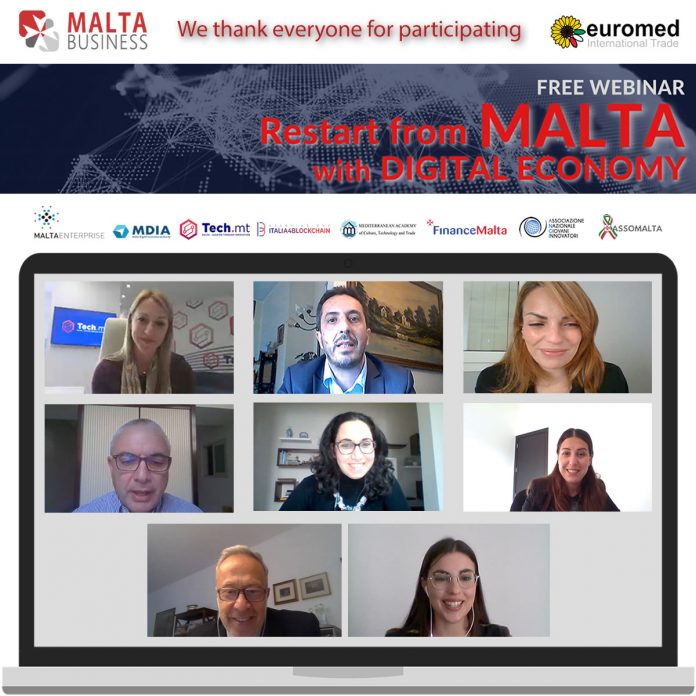 Over a hundred participants responded to Malta Business and Euromed International Trade‘s invitation for the free webinar “Restart from Malta with the Digital Economy” which aired on Monday, April 26.

The works were opened by Caterina Passariello, Project Manager of Malta Business, who raised the curtain on the Maltese digital ecosystem and its positives.

These positives were immediately highlighted by Stephen McCarthy, CEO of Malta Digital Innovation Authority, the national body responsible for promoting all government policies aimed at establishing Malta as a center of excellence for technological innovation, ensuring compliance with safety standards to protect users of new technologies.

Dana Farrugia, CEO of Tech.mt, noted the progress of the country as a center of technological excellence based on four pillars: promotion, talent development, innovation and assistance. This is reinforced by a robust diversified economy, cutting-edge technology infrastructure and tax incentives that benefit sectors such as app development, big data analytics, virtual reality, robotics, internet of things and DLT.

Melanie Debattista, Innovation promoter of Malta Enteprise, focused instead on the strengths of the Malta system and on the system of incentives that allow to give a boost to those who choose this country to do business in the world of digital economy and new technologies. In particular, the funding scheme is divided into three main pillars: new companies, startups and business development. The floor was then given virtually to individuals who testified to their positive and successful experience on the island.

Jackie Mallia shifted the focus to an attractive sector such as Artificial Intelligence. Malta is an ideal country to develop and test this new technology in order to launch it worldwide thanks to a specific regulatory framework developed through a government task force. Support includes incentives and tax credits for investors, tax plans for companies setting up and growing in the country, information, visas and qualifications, certification for innovative technologies, regulatory flexibility and a targeted code of ethics in line with European directives.

Cherise Abela Grech, Senior Associate partner of FinanceMalta, spoke about fintech and presented the Virtual Financial Act, a law passed to regulate the world of cryptocurrencies and the activities of the related operators, that starting from Malta can bring their service in Europe and worldwide. Malta has become an international fintech center thanks to the strategy of the Malta Financial Services Authority, which has fostered a synergic system of partners and structures capable of making individual providers and suppliers grow as a system.

Concluding the webinar was Ernesto Caccavale, Head of International Office for the MACTT Institute of Higher Education, who spoke about the importance of training and internationalization to exploit the opportunities offered by the world and the countless consumers and users of innovative technologies: in this regard MACTT offers targeted training projects thanks to the support of a network of specialized partners.