HomeEventsMedaWeek Barcelona closes its 13th edition with a firm commitment to green...
Events 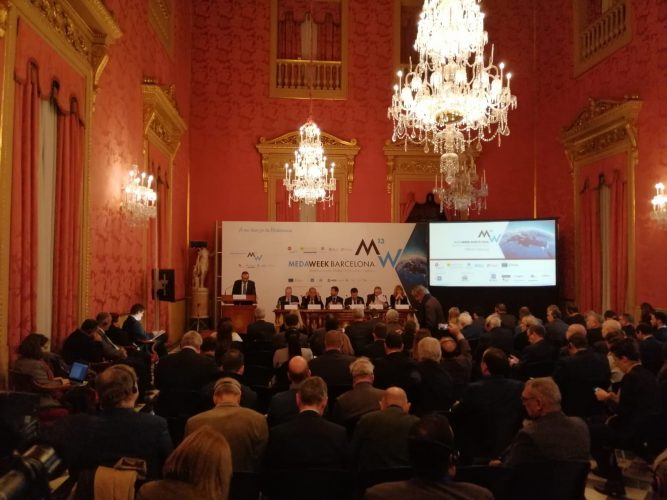 During three consecutive days (20th, 21st and 22nd of November) entrepreneurs, representatives of the private sector, authorities, chambers of commerce and economic organisations, gathered in the city to participate in the activities framed within MedaWeek Barcelona. A meeting that has been held for more than a decade at Casa Llotja de Mar, organised by the Association of the Mediterranean Chambers of Commerce and Industry (ASCAME), the Chamber of Commerce of Barcelona, ​​the Union for the Mediterranean, the European Institute of the Mediterranean and the Consorci de la Zona Franca de Barcelona.

The 2019 edition of MedaWeek Barcelona, ​​under the slogan ‘A new dawn for the Mediterranean’, was the starting point for the events to be held in 2020 on the occasion of the 25th anniversary of the ‘1995 Barcelona Declaration’. “It is time to unite the continents across the Mediterranean as an integrating axis between Europe and Africa,” said Anwar Zibaoui, ASCAME’s General Coordinator at the official opening of the event. “Our diversity is wealth and, therefore, we must unite the continents through a sea of ​​which all its peoples can be proud,” he added. “Only with a united Mediterranean will we be stronger,” said Ahmed M. El Wakil, President of ASCAME. “Together we have to overcome the borders of the Mediterranean and promote the creation of jobs and increase investment in the region.” Along the same lines, the President of the Barcelona Chamber of Commerce, ​​Joan Canadell, explained that “the role of the European Union has recently been limited and must be reinforced in order to create a new margin for cooperation that leads to a global and competitive Mediterranean, that becomes the new axis of the world”.

One of the most affluent forums was the ‘New Africa Business & Development Forum’, which served as a platform to strengthen relations between the Mediterranean and Africa. Mohamed Methqal, Ambassador and General Director of the Moroccan International Cooperation Agency, explained that “Morocco has become the second investor in Africa, multiplying by 6 our commercial exchanges, which now stand at 4.5 trillion dollars. Europe should look further south”.

Abdou Soleye Diop, Managing Partner of Mazars, commented that “everyone is talking about the opportunities that the African continent generates and will generate in the future” and although “until now Africa was seen as the world’s workforce, a mine of natural resources and millions of potential consumers, it’s a territory in which to generate growth to benefit the long-term population ”.

Another of the big bets of the ‘Mediterranean Week of Economic Leaders’ this year was sustainability through the ‘Mediterranean Sustainability Summit‘, which served to raise awareness in the private sector of the importance of implementing sustainable economies in the regions that are more affected by climate change. One of the speakers at the Summit, Milena Angelova, Vice President of the European Economic and Social Committee, emphasised the importance of circular economy strategies in cities as a way to achieve the 2030 Development Goals. “Cities are leaders in circular economy allowing more sustainable development of their communities and giving effective solutions to their citizens”, she explained.

“It is now when we face the challenge of reorienting the energy systems of both banks towards more sustainable models,” said Mohammed Dabbas, Senior Advisor for Energy Affairs at the Arab Commission for Renewable Energies. But in order to achieve this, the public and private sector’s commitment to green energy is essential. As Daniel Álvarez stated, Principal Managing Partner at Aprisco Capital, “to cooperate with countries in energy matters, it is better to offer investors as much transparency as possible and help them enter the market”

Sustainability must not only be achieved in the environmental field, but there are other sectors such as finance, in which responsibility also becomes essential. One of the systems based on sustainable values ​​is Islamic finance. Hassen Ben Doua, Head of Division of the Central Bank of Tunisia, said that “Islamic finance can contribute to economic growth through social financial instruments that integrate those who are excluded”. Serkan Yüksel, Director of the Department of the Istanbul Finance Center, contradicted one of the most widespread beliefs about the sector: “We all believe that Islamic finance is only for Muslim countries, but in reality, it is for the whole world. It could be a good option for Western markets to start participating in Islamic economies”.

Good practices in social economy, which were presented at the ‘Mediterranean Social Economy Forum’, must also be taken into account under the scope of sustainability. In the Mediterranean region, especially on its southern shore, it is necessary to take as an example the European social economy models to generate inclusive systems and youth employment. Carlos Lozano, Coordinator of ESMED-CEPES (Spanish Confederation of Social Economy Companies), said that “social economy accounts for 10% of the total number of companies in the Mediterranean. A system that is based on solidarity, participation and reinvestment of its surpluses, which provides economic, social and environmental value, and generates inclusive economic growth”.

Within the framework of MedaWeek Barcelona, ​​many national and international business meetings have also been held, including the Employers’ Group of the European Economic and Social Committee. In addition, ASCAME awarded its traditional ‘Mediterranean Awards’ and also announced the creation of the new ‘Miquel Valls Award’ in recognition of Mediterranean startups created by young women, which will be endowed with $ 15,000.