Minister Evarist Bartolo pays a visit to the Sultanate of Oman 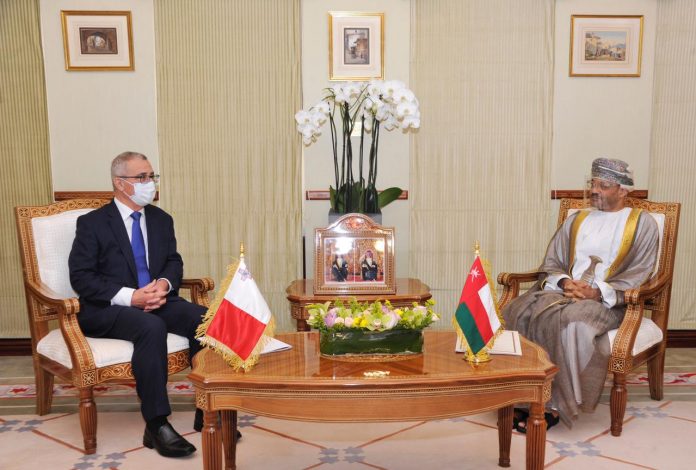 Minister for Foreign and European Affairs Evarist Bartolo concluded an official visit to the Sultanate of Oman, where he held a bilateral meeting with the Minister of Foreign Affairs Badr Albusaidi.
Talks between the two ministers focused on potential areas for strong cooperation based on the excellent relationship between the two countries.
In fact, the ministers identified three priority areas for cooperation for the coming months. These are, namely: aquaculture, in view of the maritime nature of both countries; the pharmaceutical industry, both in terms of regulation as well as quality control; and tourism.
They also agreed to cooperate in the fields of education; with an emphasis on applied learning and vocational education; and in the field of financial services, on which they aim to work together to strengthen the fight against money laundering and international organized crime.
Concurrently, both sides are expected to conclude bilateral agreements on double taxation, mutual investment and transport and air services.
During the bilateral meeting, the ministers also spoke about their country’s foreign policy, which is based on the same principles. Namely neutrality; the pursuit of peace with all nations of the world; honesty and transparency in bilateral relations; tolerance towards different religions and diverse views; the promotion of dialogue and against the use of force; the commitment not to be used by other countries against their adversaries; and to use their country as a tool of reconciliation.
In this context, the two sides agreed to further strengthen their relationship and to support each other in international fora.
The ministers also noted developments in the Gulf region and in Libya, and hoped that these would translate into lasting peace and prosperity for all peoples.
During his official visit to the Sultanate of Oman, Minister Bartolo also met the Chamber of Commerce and Industry as well as the Oman Investment Authority, with a view to achieving the goals agreed between the two ministers.