Malta launches its first strategy for growth and partnership with Africa 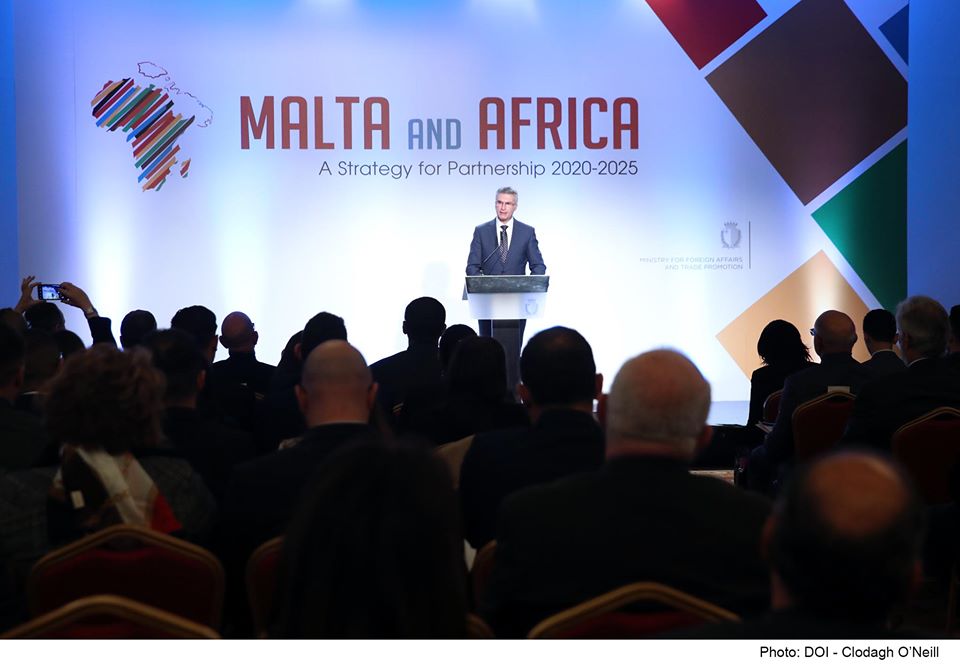 Minister for Foreign Affairs and Trade Promotion Carmelo Abela launched the first policy document for public consultation wherein Africa is being seen by Malta as a vital strategic partner for the coming five years.

Focusing on trade, diplomacy and development, this policy document entitled “Malta and Africa: A strategy for partnership 2020-2025” concentrates on the exchange of wealth and creating opportunity in changing times between Malta and the continent of Africa.

In his opening address, Minister Abela highlighted the message that Africa is an emerging economic force. He remarked that Malta’s national strategy serves as a guide for the development of Malta’s relations with the continent of Africa in the period ahead, ensuring that Malta is not simply a passive player in a changing world, but an active contributor to solutions, and a worthy proponent of policy and opportunities for growth. In the Minister’s words, the strategy responds to the demands of a changing Africa and charts how Malta can deepen relations through the values of trust and the dialogue of partnership.

Trade. “To make this a success, we need to be part of the narrative of growth and opportunity in Africa”, stated Minister Abela, as he outlined proposals to build on Malta’s strong existing relationships include a greater role for Maltese business, a role that will help create new investment and trade which will be mutually beneficial to Malta and Africa. “There is a clear message emerging, which we must heed. Africa does not simply want aid. It wants trade, development and growth. More business-to-business contact and the sharing of skills and knowledge. Malta-based enterprises are well-placed to play a greater role in Africa, and we commit ourselves in this strategy to helping with the research, the networking, and the groundwork that can identify and facilitate two-way trade and investment”, said the Minister. On this note, he added that in 2020, his Ministry, which is responsible for Trade Promotion, will be leading trade delegations to Ghana, Ethiopia and Ivory Coast, as well as an exploratory visit to Rwanda, whilst also celebrating the opening of the first Maltese Diplomatic Mission in Africa, in Ghana.

Development. Minister Carmelo Abela noted that the strategy also highlights the importance of development through the sharing of good practice, to empower a rising Africa by unleashing the potential of every person, irrespective of gender, creed, or orientation. In this regard, Minister Abela highlighted the good work being done by Maltese civil society through the Maltese government’s Overseas Aid programme, which proudly flies Malta’s flag and shares Malta’s values of solidarity. It is to be noted that, in 2018, Malta’s expenditure for development, the majority of which was towards Africa, was over €28,000,000. From 2020, the Official Development Assistance Fund has been increased to reach a total sum of €2,000,000. The Minister announced that a call will soon be issued for projects, encouraging a collaboration between non-governmental organisations and the private sector, in support of international development projects.

Diplomacy. Minister Abela remarked that Malta has engaged with the Mediterranean-bordering countries of North Africa since time immemorial. The government is now actively pursuing a wider strategy for Africa beyond its northern shores, consolidating Malta’s links in Africa through its membership of the Commonwealth and within the European Union. The Valletta Summit of 2015, hosted by Malta, sent an important message, namely that migration cannot be addressed as a singular issue. Malta has consistently taken a proactive role in seeking international solutions to the challenges of our times. Minister Abela reiterated Malta’s commitment to Africa, stating that, “through this strategy, Malta will advocate for growth, for dignity, and for empowerment in Africa. We will seek to be true partners through our positions and policies within the European Union, the United Nations, and elsewhere”.

During the talks in Tripoli, the solutions to be put in place to increase Maltese investments in Libya were discussed.
Read more
Funds

The Institute of Tourism and the Malta Business Bureau of Malta involved in the life foster project to reduce the percentage of food waste in the catering sector.
Read more