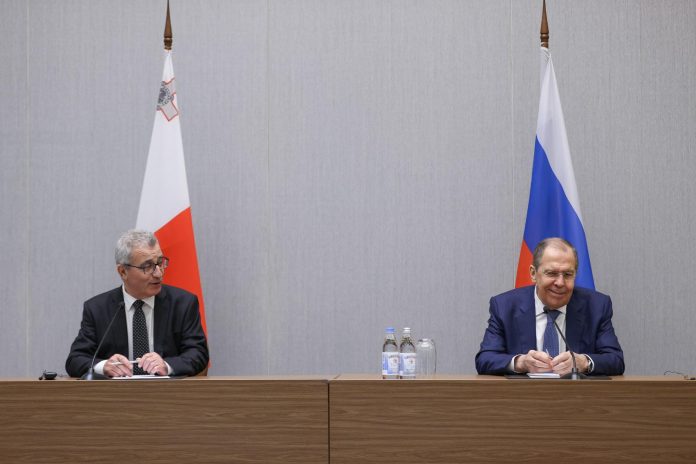 During a working visit to Russia, Minister for Foreign and European Affairs Evarist Bartolo held a bilateral meeting with his counterpart, Foreign Minister Sergey Lavrov. In Sochi, the two sides discussed a wide array of topics of bilateral, regional and international importance.

In a press statement following the meeting, Minister Bartolo described the talks as very cordial and respectful. He stressed that whatever the differences between nations, if there is the will to safeguard the future of this planet, we must keep talking to eachother and have honest and frank conversations.

In this context, Minister Bartolo welcomed the news of an upcoming summit between the USA and Russia and the prospect of normalising relations between the two states. He added that the same can be done between the EU and Russia as long as there is good will and respect from both sides.

Minister Bartolo stressed that respect for international law remains crucial for Malta, and that such relations must always be within this framework. From a bilateral perspective, Minister Bartolo said that Malta is very happy with the steadily improving ties in trade and tourism between the two countries, although more needs to be done. In this regard, he announced that in the coming weeks Malta and Russia will sign new MoUs in the fields of sport, culture and health.

Minister Bartolo held that cooperation with Russia is also strong in the fight against international organized crime and the financing of terrorism. Referring to the Middle East conflict, Bartolo explained that Malta and Russia are on the same page and that the ceasefire alone will not resolve this tragic issue. In this context, he called for a lasting solution through which Israelis and Palestinians live next to each other, in security and peace and, above all, enjoying equal rights.

The two sides also had a positive exchange of views on Libya, with Minister Bartolo reiterating Malta’s belief in a free, united Libya run by Libyans. Importantly, he announced that upon receiving the Libyan Government’s instructions, the Government of Malta is ready to ship the 1.2 billion dinars currently held in Malta to be used for the good and wellbeing of the Libyan people who have endured so much suffering over the years.

Minister Bartolo concluded that Malta is also happy to work with Russia in the fight against all forms of intolerance. He also stressed that if we want to learn from history, we must also make sure to set the record straight on WWII and to recognize the very important role that Russia played in the victory over Nazism which put the rest of humanity at risk.

On the other hand, the Russian Minister Sergey Lavrov expressed satisfaction with the recent agreement reached between the two countries against double taxation:”We have noted Malta’s efforts to adapt national laws, specifically in the tax sphere, to the requirements of international financial regulators,” Lavrov said. “We commend our partners for the prompt ratification of the protocol of the bilateral convention on the avoidance of double taxation. This will definitely benefit the legal regulation of relations between our countries in this sphere,” he specified.

The parties also discussed “opportunities for teaming up to combat the coronavirus pandemic and spoke in favor of the gradual restoration of tourist exchanges, particularly considering that Aeroflot’s scheduled direct flights to Malta will restart today,” the Russian Foreign Minister pointed out.

The outcome of the talks confirmed the interest of both countries in cultivating relations in very different areas, despite the challenging situation in international affairs and the remaining epidemic restrictions, Lavrov noted.

Malta in pursuit of trade opportunities with the Emirates