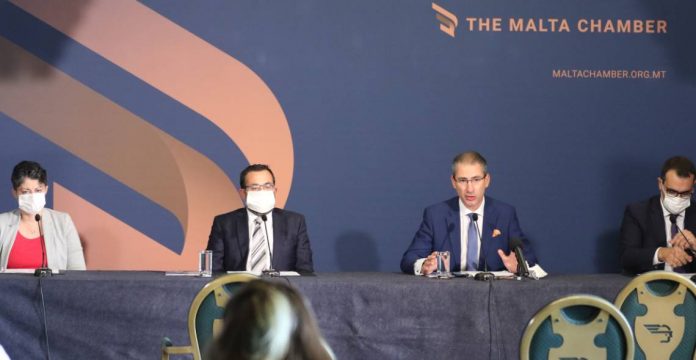 “Monday’s budget, and no future budget, needs to be a particularly formative budget, which will determine the country’s future during and after this pandemic. It should aim to forge our economic future not just with essential short term measures, which are key to recovery, but also with long-term instruments for a more sustainable economy and a resilient Maltese society in the future” said Perit David Xuereb, President of The Malta Chamber of Commerce, Enterprise and Industry as he unveiled the business representative body’s recommendations for the annual Budget 2021 during a press event on Wednesday.

Underlining the crucial nature of the upcoming financial exercise which is expected to be presented in Parliament by the Minister for Finance on Monday, David Xuereb said that the country had a clear choice to make at this very important juncture. “We can either plan go back to the pre-Covid principles and priorities, or else develop a sustainable economy that is focussed on a clear vision of where we want to see ourselves in the future and will enable us to be a strong, Smart and Sustainable Island”

“This is why, as a Chamber we have collated our ambitions for the Country based on three pillars: Recover – Re-Invent – Re-Invest. To reach these objectives, the budget needs to incentivise the economy to reskill, rebuild, restructure, and re-engineer itself” David Xuereb said.

The Malta Chamber is insisting that the Country and its leaders be brave and take all the smart decisions that will see us through this pandemic stronger than ever.

The Malta Chamber President then proceeded to explain how the document titled ‘Driving the Wealth and Wellness of Society” made 11 calls for action, which proposed over 130 Concrete Proposals towards one holistic national vision for the Budget 2021.

“Ultimately the implementation of business-driven growth-enhancing measures are conducive towards the country’s sustainability goals and the physical and mental wellness of our people” Perit Xuereb said.

The Malta Chamber CEO Ing. Edward Chetcuti explained the intricate process through which the proposal document was produced, with the aim to provide value to members of the business community in Malta and ultimately the public at large. “The formulation of the Budget Proposals document, brought together all the input received by The Malta Chamber, since November last year” Edward Chetcuti noted.

“During this period, the Chamber was responsible to provide thought-leadership through a series of well-received documents, namely ‘The Manifesto for Good Governance’, ‘The Economic Vision 2020-2025’, proposals for four Stimulus Packages since March 2020 as well as ‘The Recommendations for the MoneyVal Assessment’”, The Chamber CEO said.

“The recent Think Tank Exercise with its theme-specific Round Tables and their Sectorial Papers also played a crucial role in the formulation of policy in the last months” Ing. Chetcuti said. “All this process was crucial to the formulation of today’s Budget Proposals Document for 2021” he concluded.

Addressing the press conference, The Malta Chamber Deputy President Ms Marisa Xuereb said that a number of immediate short-term measures were needed, to guarantee the survival, and recovery of businesses in the context of the current economic crisis.

Ms Xuereb said that The Malta Chamber was proposing the re-launch of the vouchers initiative to all local residents, directing the expenditure to hospitality and retail, in a bid to stimulate domestic demand.

The Chamber Deputy President also explained how many businesses were facing issues of liquidity, as creditors were having difficulties paying for their supplies. “Hence we are proposing a scheme that incentivises prompt payment between private operators. Such a scheme could have the potential to free millions of euros in money owed to different suppliers therefore having a multiplier effect of prompt payment and liquidity through the whole supply chain” Ms Xuereb explained.

In a bid to help businesses reduce their overhead costs, The Malta Chamber also proposed a series of measures, including increased Rent Assistance to all Commercial Tenants, Reduction of Utilities and Fuel Prices to reflect market prices for industry and domestic use, and the Optimisation of testing and quarantine leave.

Expanding on the last point, Ms Xuereb said “There needs to be a priority testing hub for the manufacturing sector and other sectors that cannot work from home, as this compromises individuals that cannot afford to wait five days to go to their test” the Deputy President noted.

Addressing issues related to the labour market, Ms Xuereb said that the economy needed to minimize labour shortages at all costs. “It is therefore important to facilitate the employment and renewals of Third Country Nationals that address the gaps in companies that are still facing labour shortages. The Key Employee Initiative may also be used to meet the skills mismatch that is limiting the productive capacity and facilitate the process of transfer of employment of Third Country Nationals away from hard hit sectors and into sectors that are running short of resources” Ms Xuereb explained.

The Chamber Deputy President also spoke of the importance of maintaining the Wage Subsidy Scheme until the vaccine would be administered. “The assistance could be linked to the Re-engineering of business to enable Employee Adaptability through Reskilling and Upskilling for the employee to be more future proof” Ms Xuereb concluded.

Speaking during the press conference, The Malta Chamber Head of Policy Mr Andre’ Fenech said that a series of long-term recommendations were also being proposed ahead of the Budget 2021.

The Malta Chamber proposed the implementation of a Business Re-Engineering and Transformation Scheme that would enable businesses to receive subsidised consultancy services to re-jig their business operations and operate better by possibly diversifying their operations.

Speaking on the subject of Education, Mr Fenech said “it is vital for schools to remain open throughout the scholastic year, while remaining mindful of the Covid realities.” In its document, The Malta Chamber outlined a series of proposals that would help achieve this target.

Mr Fenech also spoke about further measures the Chamber was proposing in a bid to prioritise the environment and infrastructure, driving the country towards a Zero Carbon Economy.

Rebuilding and Safeguarding Malta’s Reputation was also a priority for The Malta Chamber. “The development of good governance structures in the Private Sector, while increasing resources in all Government Entities responsible for the transparency, is crucial to ascertain transparency and good governance as national priorities” Mr Fenech concluded.

Malta amongst first countries to ban imports of single-use plastics

The analysis of Sergio Passariello, CEO of Malta Business, on the measures planned by the Maltese Government for 2021
Read more