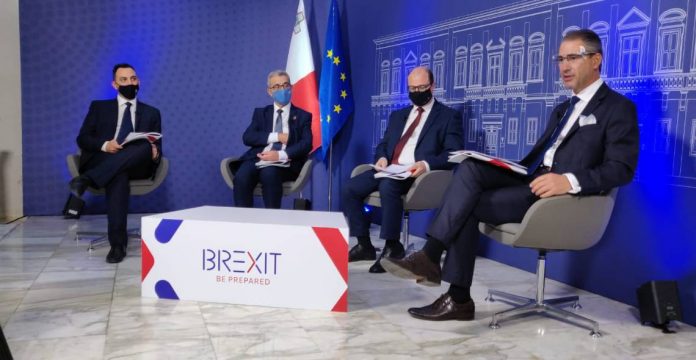 The President of The Malta Chamber of Commerce, Enterprise and Industry Perit David Xuereb said that with 50 days to the end of the Brexit transition period, businesses needed to make sure that they had everything in place, in order to ascertain a continuation of their business come next January.

The Malta Chamber President was addressing a press conference which launched an information campaign to help businesses get ready for a probable no-deal Brexit. The Malta Chamber co-organized the event with the Ministry for Foreign Affairs and the Parliamentary Secretariat for EU Funds.

Addressing the press conference, The Malta Chamber President said that discussions between the UK and the EU were geared towards an agreement, however, this remained elusive.

“We are cautiously optimistic however we know that by the end of the year there might be a no-deal exit. We urge businesses to remain continuously updated,” he said, urging businesses to participate in a series of upcoming information sessions the Chamber was organising together with the relevant Ministry.

The Malta Chamber President also urged businesses to speak with their suppliers and counterparts in the UK as soon as possible, in order to make sure that their businesses would be in a position to function post-December 31. David Xuereb noted how The Malta Chamber had been following the developments around the Brexit negotiations through its partner organisations at EU level Business Europe and Eurochambres, as well as through the Malta Business Bureau.

In fact, as long as Brexit had been on the cards, The Malta Chamber had organised a number of events on the subject and kept the members of Malta’s business community well informed on the developments. “With just 50 days to the end of this transition period, it is now time to take necessary action to safeguard our businesses” Perit Xuereb said, as he urged companies to come forward and contact the Chamber for more information and assistance on the subject.

In preparation to the end of the Brexit transition period, The Malta Chamber has teamed up with the Ministry for Foreign and European Affairs and the Parliamentary Secretariat for EU Funds, to keep businesses up to date about how best to be prepared for a probable no-deal Brexit.

For further information contact the Malta Business Agency offices by filling in the following form.

Even in Malta the solution to activate an account in an easy, fast and secure way is at hand.
Read more
Companies

Opening a business account is easy: with Malta Business Pay

Even in Malta the solution to activate an business account in an easy, fast and secure way is at hand.
Read more
Companies

The Power of AI in business: summit in Amsterdam