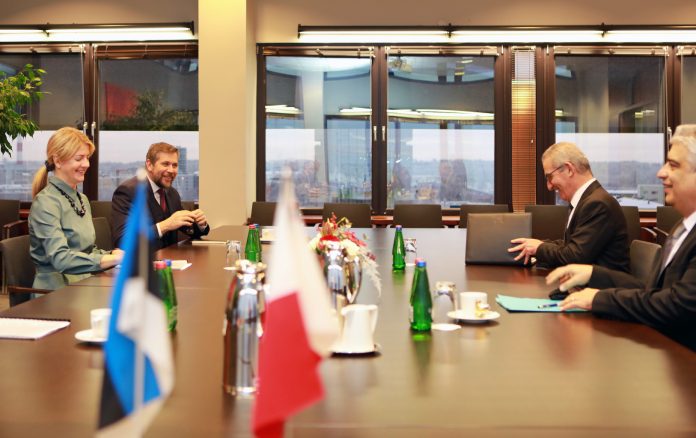 Minister for Foreign and European Affairs Evarist Bartolo and the Minister for Foreign Affairs of Estonia Eva Maria Liimets held talks on security in Europe and the Mediterranean at meetings in Tallinn, Estonia. The two ministers spoke about the common challenges facing the two countries, while discussing the political and geographical situation of the two countries and the surrounding Baltic and Mediterranean waters. Both Ministers agreed that great powers should not impose themselves on small countries and that their peoples should have the right to freely choose their own lives. Ministers Bartolo and Liimets agreed that the two countries have a lot to offer in the field of tourism, sports tourism, education, health, gastronomy, digital information, culture and sport. Minister Bartolo was accompanied by the Maltese Ambassador to Estonia Kenneth Vella.
On the thirtieth anniversary of the establishment of diplomatic relations between Malta and Estonia, Minister Bartolo inaugurated the new offices of the Maltese consulate in Tallinn. The Maltese Consulate in Estonia facilitates contact between the two countries. Reference was made to Thursday’s direct flights set up between the two countries recently by Malta Air which is facilitating this collaboration and travel between the countries. The ceremony was attended by Aku Sorainen, the Maltese Consul in Tallinn,  Estonian Foreign Affairs Minister Liimets and Maltese Ambassador Kenneth Vella.
Minister Bartolo  met with Marko Mihkelson, chairman of the Foreign Affairs Committee of the Estonian Parliament, Riigikogu, Tallinn who discussed the role of the committee, the work done between the committee members and the Estonian Minister of Foreign Affairs, the political situation in Europe and the international situation, the work of both countries to make progress in Africa and the lives of the African people.
Minister Bartolo met with the Minister of Education Liina Kersna in the city of Tartu. Both Ministers discussed the development of education and the education system in both countries, about sharing ideas between educators and ways  to increase collaboration in the coming years. Both countries are already collaborating in this field including the introduction of the Estonian 99math resource in our country.
Minister Bartolo also met with Professor Toomas Asser, Rector of the University of Tartu. Minister Bartolo stated that as a country, Malta should start looking more closely at Estonia’s model and success in this area in recent years. In Malta there should be more promotion of how Estonia can also be a center of study at tertiary level in certain subjects for our students, especially at Masters and Doctorate level.
Professor Asser spoke about the history, reputation, organization of the University which is among the top 100 in the world and the best in the country. Professor Asser confirmed that following meetings held in recent months, the University will be offering a number of accredited online courses for free for the first time to Maltese students and said new cooperation will be sought between the Faculty of Education of this University and that within the University of Malta.
Minister Bartolo met with Urmas Klaas, Mayor of Tartu, where they discussed the administration of local governments in Estonia and Malta. It was agreed that Tartu, the second largest city in the country and a University city, has a lot to offer and more efforts can promote it in Malta. The possibility of twinning with a Maltese town or village was also brought up during the meeting.
Minister Bartolo also visited Estonia, the world-renowned Estonian Digital Agency, the National Museum of History and Kumu Museum of Art.