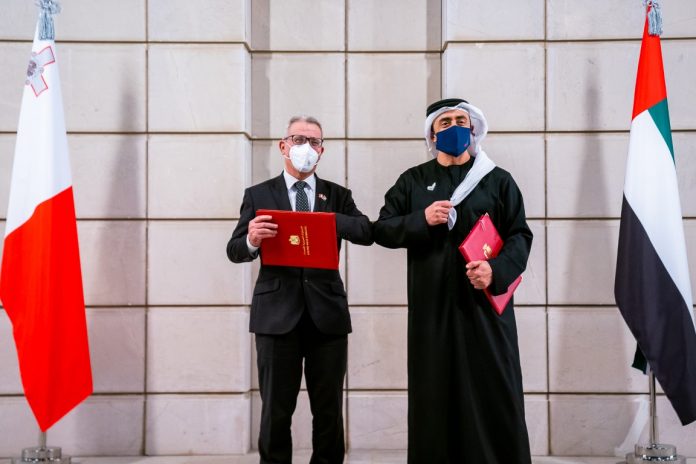 Sheikh Abdullah bin Zayed Al Nahyan, Minister of Foreign Affairs and International Cooperation of the United Arab Emirates, met the Maltese Minister of Foreign and European Affairs, Evarist Bartolo, to examine together the prospects for further strengthening of cooperation between the two countries in various fields.

The occasion was a recent trip to the Emirates by Minister Bartolo, during which he was received by the highest diplomat at the headquarters of the local Ministry and discussed with him a number of issues of international and regional interest.

The two sides delved into the latest developments in the global battle against the Covid-19 emergency and the contributions of the two countries to international efforts to ensure delivery of the vaccine to all countries, along with intensive work to stem the fallout of the pandemic in the economy.

Sheikh Abdullah stressed the privileged bonds of friendship between the UAE and Malta and their willingness to consolidate them in the best interest of their peoples.

Prior to the meeting, Sheikh Abdullah exchanged three memorandums of understanding with the Maltese minister: the first concerned cooperation in higher education and scientific research, the second the establishment of joint committees between the two nations, while the third involved both the Emirates Diplomatic Academy and the Mediterranean Academy of Diplomatic Studies at the University of Malta.

These agreements are the latest step in a bilateral relationship between Malta and the Emirates which has a history of 44 years, and which in the last period has been directed, on the Maltese side, towards strong support for the business community, accompanied on several occasions at the most important fairs organized in Dubai in order to promote their activities beyond the borders.

On the other hand, Malta has benefited from a series of investments on the part of the United Arab Emirates: in particular as regards the Smart City residential project, the telecommunications and hotel holding sectors.

Malta’s strong presence in the Middle Eastern chessboard and the commercial opportunities which this new opening sanctioned by the Governments will bring to Maltese companies will also represent a benefit for foreign companies which will decide to establish their headquarters or a branch in Malta, also in view of the Dubai Expo 2021-2022, where Malta intends to play a leading role.

To find out about the opportunities arising from the Maltese presence in the Middle East and the start-up of a business project in Malta, contact the Malta Business Agency team by filling in the following form.