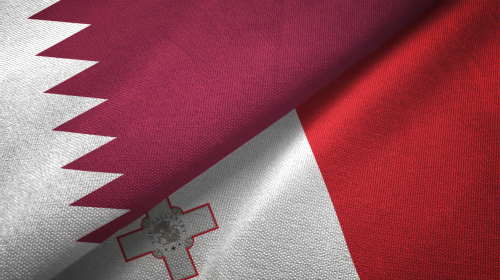 Within the framework of Qatar’s endeavour to find new, fruitful partnerships and to consolidate good relations with various countries, Maltese President George Vella was welcomed for an official visit to the country. His Highness the Amir Sheikh Tamim bin Hamad al-Thani met the Maltese president at the Amiri Diwan to discuss bilateral relations and ways to support and develop them, in addition to reviewing a number of issues of common interest.

The visit and discussions contributed to supporting and developing relations between Doha and Valletta and transferring them to new and advanced levels of co-operation and co-ordination in the political, economic, commercial, investment fields and other sectors.
Qatar and Malta have strong and long-term friendly relations.

Qatar’s decision to open an embassy in Malta on Nov 20, 2013 contributed to strengthening the existing relations between the two countries in various fields.

There are many indicators and positive developments that promise further expansion of co-operation between the countries in order to achieve common interests and aspirations.
The mutual visits between the two friendly countries contributed to the continuous development of bilateral relations.

Qatari-Maltese relations are based on the principles of mutual respect and common interests. These relations are witnessing great development in various fields and are constantly growing thanks to the desire and common political will, in addition to the keenness of both sides to develop them for the benefit of the two countries and their people. This comes at a time when the two sides are seeking to explore investment opportunities, especially after the Covid-19 pandemic receded.

Qatar and Malta share visions regarding many current files and issues, and believe in the necessity of solving all disputes and problems between states or within a single state by peaceful means and through dialogue and impartial mediation.

Qatari-Maltese relations regulate a set of agreements and memorandums of understanding in the political, economic, educational, cultural, investment and air transport fields, in addition to co-operation and news exchange, youth and sports, mutual protection of investment, income taxes and exemption from visa requirements for holders of diplomatic and special passports and combating illicit trafficking in narcotics, psychotropic substances and organised crime.

Furthermore, there is an agreement to establish a businessmen council between the Qatar Chamber of Commerce and Industry and the Malta Chamber of Commerce.
Maltese political and commercial delegations visit Doha continuously to discuss the development of relations between Doha and Valletta in various fields.

In this context, in March 2017, a commercial delegation from the Maltese foreign trade organisation visited Doha and along with those from a number of Maltese companies working in the fields of banking, education, information technology, contracting and real estate.

Qatar Chamber also hosted the Maltese delegation, which gave a presentation on the most prominent investment opportunities available in the prominent sectors in Malta, including food and beverages, software, education and training. It also introduced the Maltese foreign trade organisation, which was established in joint co-operation between the Government of Malta and the Malta Chamber of Commerce to help Maltese companies develop their industries and products, and to ensure their access to global markets.

The First Vice-Chairperson of Qatar Chamber Mohamed bin Ahmed Twar al-Kuwari said that the time is right to increase co-operation between the private sectors of the two countries, especially since the two sides enjoy stimulating investment opportunities, expressing his hope that the Maltese market will witness Qatari investments.

The Qatari Businessmen Association (QBA) also organised a symposium called ‘Qatar-Malta Business’, in co-operation with the Chamber of Commerce of the Republic of Malta, to discuss prospects for joint co-operation and mechanisms for enhancing communication between businesspersons from the two countries to enter into partnerships that promote economic diversification mechanisms.

In his speech at the opening of the symposium, HE the Chairperson of QBA, Sheikh Faisal bin Qassim al-Thani, said that this meeting comes in the context of transferring relations between Qatar and Malta to higher levels of co-operation, so that channels of communication are opened with businesspersons in Malta to identify investment opportunities on the ground to serve the interests of both countries.

During the symposium, Malta Enterprise Chief Operations Officer Marika Tonna gave an overview of the Enterprise’s role as Malta’s economic development agency tasked with attracting new foreign direct investment as well as facilitating the growth of existing operations. She explained that the Enterprise acts as an adviser to the government, especially with regard to economic policy, due to its strong relations with economic authorities in Malta and abroad. Malta Enterprise is also a national point of contact with the European network of companies, as foreign companies operating in Malta can form networks with companies in more than 60 other countries, she added.