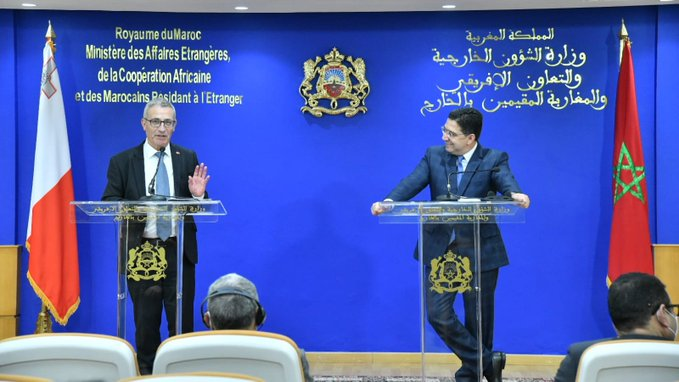 The Republic of Malta is preparing to open a consulate in Casablanca to consolidate bilateral cooperation with Morocco.

The announcement came during a recent meeting held in Casablanca between the Maltese Foreign Minister, Evarist Bartolo, and his Moroccan counterpart Nasser Bourita.

Speaking at a joint press conference following their talks, MFA Nasser Bourita underlined that the visit to Morocco of the Maltese top diplomat takes part in the wake of a positive dynamic in the bilateral relations in recent years.

MFA Bourita seize this opportunity to commend the solidity of the relations linking the two countries, which are united by a common Euro-Mediterranean neighborhood and strong relations between Morocco and the European Union, which face common challenges in the Mediterranean.

Mr. Bartolo, he reminded that the Kingdom of Morocco and the Republic of Malta had maintained relations for nearly 50 years, highlighting the need to further develop economic ties between the two countries.

The two countries agreed on the creation of a joint mechanism to boost their economic cooperation and strengthen their consular relations, and welcomed the opening by Malta of a consulate in Casablanca, the first in the region, which will be focusing on developing economic ties.

Touching on regional issues, the Maltese top diplomat highlighted that Rabat has a “discreet diplomacy which considers that it is the Libyans themselves who must resolve their situation”, adding in this regard that Malta recognizes Morocco’s key role within the Mediterranean region and in Africa.

“We would like Europe to understand better that there cannot be security and peace in Europe if there is no security and peace in Africa. The future of the two continents is linked and regardless of the importance we attach to other regions of the world, Europe’s immediate neighbor is Africa,” pointed out Mr. Bartolo.

The Kingdom of Morocco and the Republic of Malta expressed, on this occasion, their determination to work together within the framework of the Union for the Mediterranean (UfM) to give new impetus to economic development.

Regarding the Sahara issue, Malta affirms through the voice of its MFA that it recognizes the efforts made by Morocco to move forward within the framework of the UN in order to achieve a mutually acceptable solution to the regional conflict over the Moroccan Sahara.

On the multilateral level, Mr. Bartolo expressed his gratitude to Morocco for its support for Malta’s candidacy for the UN Security Council for the 2023-2024 period, emphasizing that his country will be a voice for mediation, negotiation and peace.